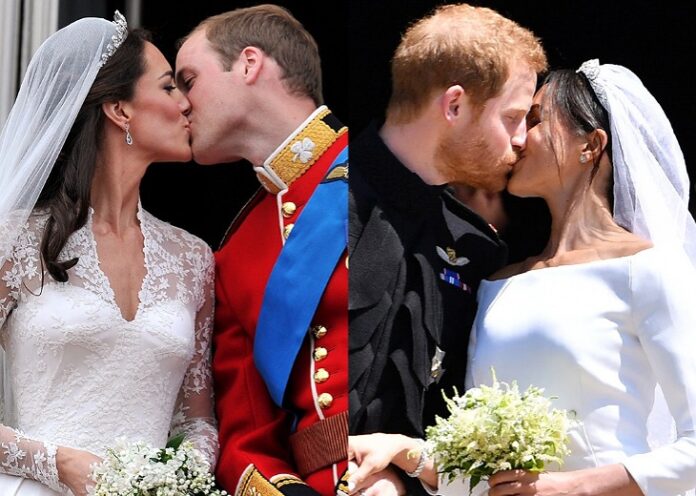 In advance of Prince Harry and Meghan Markle’s first wedding anniversary, we’re taking a look back at their royal wedding, and how it compared to when Prince William wed Kate Middleton back in 2011. Here’s how the two celebrations were alike, and how they differed.Kate Middleton wore a bespoke wedding gown designed by Sarah Burton for Alexander McQueen that cost an estimated $434,000 to make. It featured a nine-foot-long train and handmade lace made by the Royal School of Needlework. 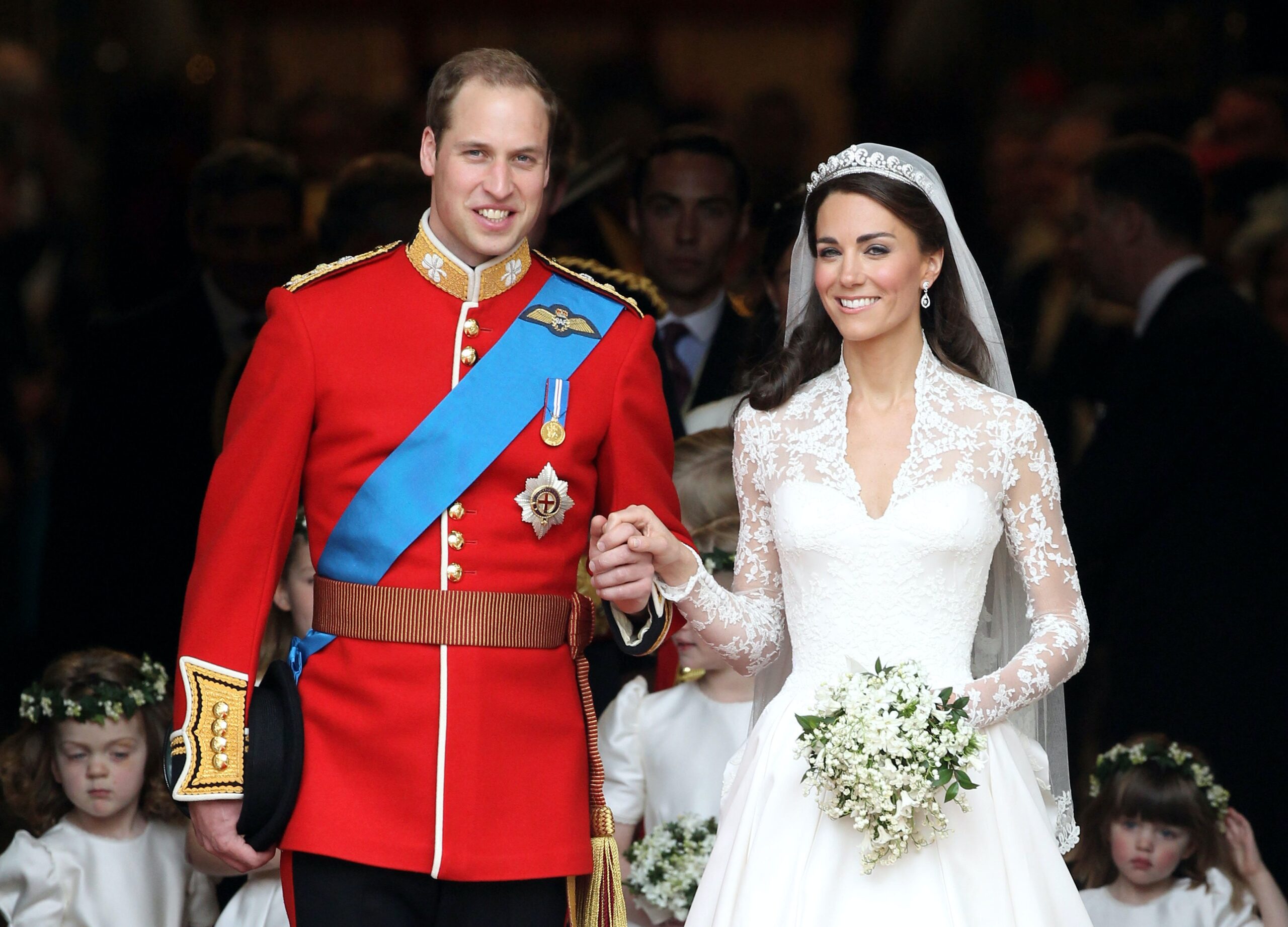 Much to the surprise of everyone, Meghan chose British designer Clare Waight Keller of Givenchy to design her sleek and modern wedding gown. While both dresses featured long sleeves, Meghan’s gown was unadorned by beading or lace and had a boat neckline instead of Kate’s now-iconic v-neck dress.Kate’s veil was embroidered by the Royal School of Needlework with flowers at the edges.While Kate opted for a long train and shorter veil, Meghan did the opposite and wore a 16.5-foot-long veil designed by Clare Waight Keller for Givenchy. On the border of the veil, Waight Keller embroidered the flora of all 53 countries of the Commonwealth. 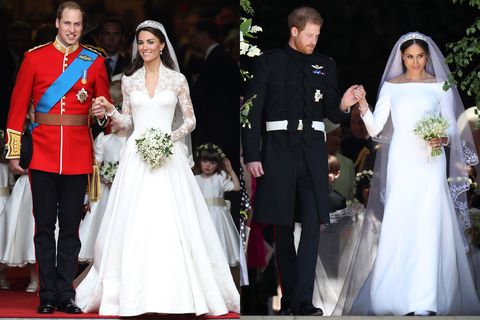 Prince William proposed to Kate Middleton with his mother’s sapphire engagement ring. On their wedding day, Kate received a Welsh gold wedding band.Prince Harry proposed to Meghan Markle with a custom ring featuring a gold band, two diamonds from Princess Diana’s personal collection and a center stone from Botswana, where the the newlywed couple reportedly fell in love. Her gold wedding band is also made out of Welsh gold. Unlike Prince William, Prince Harry has chosen to wear a wedding ring.For her “something borrowed,” Kate Middleton wore the Cartier halo tiara on loan from the Queen who received it as a gift on her 18th birthday. It initially was given to her mother by her father, George VI. Her earrings were by Robinson Pelham and were a gift from her parents Carole and Michael Middleton. 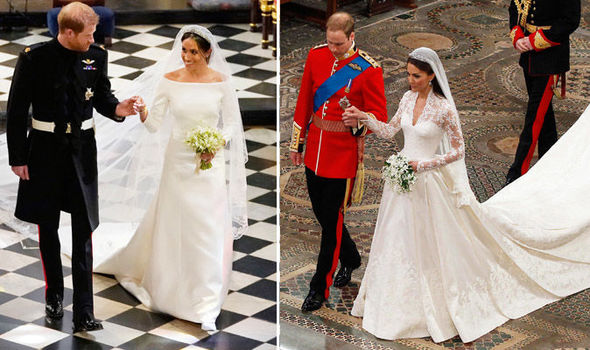 Meghan Markle also wore a borrowed tiara from the Queen. She picked out Queen Mary’s bandeau tiara, which the Queen inherited from her grandmother Queen Mary. Her earrings and bracelet were both made by Cartier.Kate carried a small all-white bouquet that included lily of the valley, sweet William, hyacinth, ivy and a sprig of myrtle, a royal tradition dating back to Queen Victoria’s wedding.According to Kensington Palace, Prince Harry handpicked some of the flowers that ended up in Meghan’s bouquet designed by Philippa Craddock. 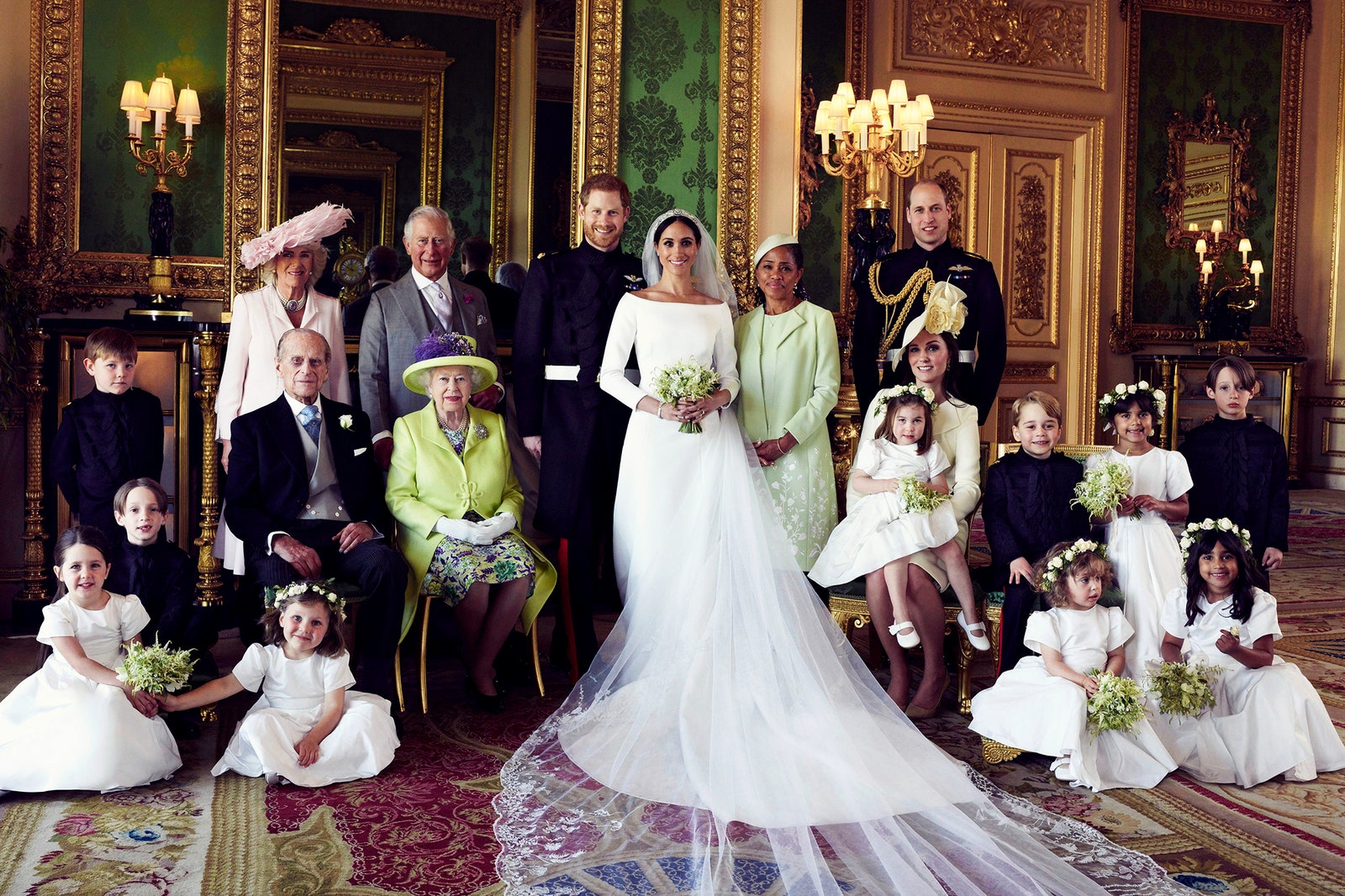 The small bouquet included forget-me-nots—the Princess of Wales’ favorite flower—sweet peas, lily of the valley, astilbe, jasmine, astrantia and a sprig of myrtle.Prince Harry served as his brother’s best man when he wed Kate Middleton in 2011. Both brothers wore their military uniforms.The Duke of Cambridge served as Prince Harry’s best man. They both wore the frockcoat uniform of the Blues and Royals.Kate Middleton’s younger sister, Pippa Middleton, served as her maid of honor for the royal wedding in 2011, wrangling the children and carrying her long train into the church. She also wore a custom Alexander McQueen dress that day. 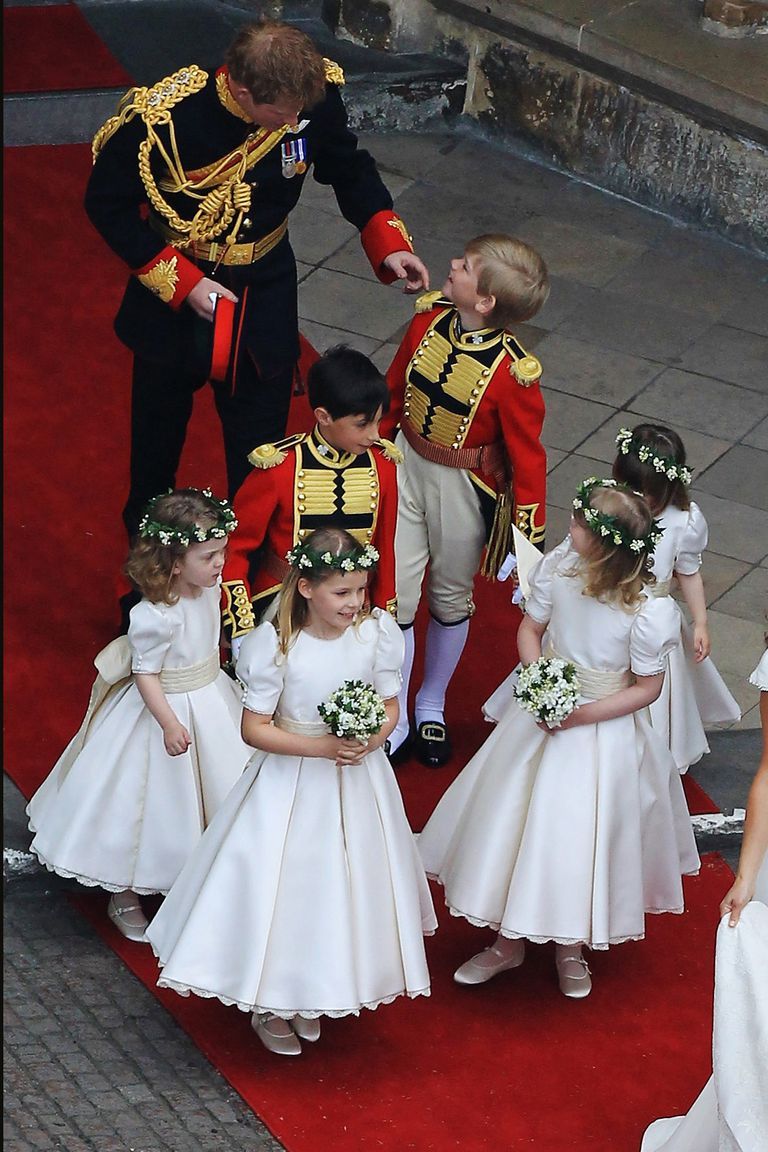 Because Meghan chose not to have a maid of honor, two of the older page boys at her wedding carried her veil as she entered the church.Kate and Will had four bridesmaids and two page boys at their wedding, including Tom Petiffer, Lady Margarita Armstrong-Jones, Grace Van Cutsem, Lady Louise Windsor, Eliza Lopes, and William Lowther-Pinkerton.Meghan and Harry’s wedding party was much larger with 10 bridesmaids and page boys, including Princess Charlotte and Prince George, Zalie Warren, Florence Van Cutsem, Jasper George Galloway Dyer, Remi and Rylan Litt, Ivy Mulroney, and her twin brothers Brian and John Mulroney. 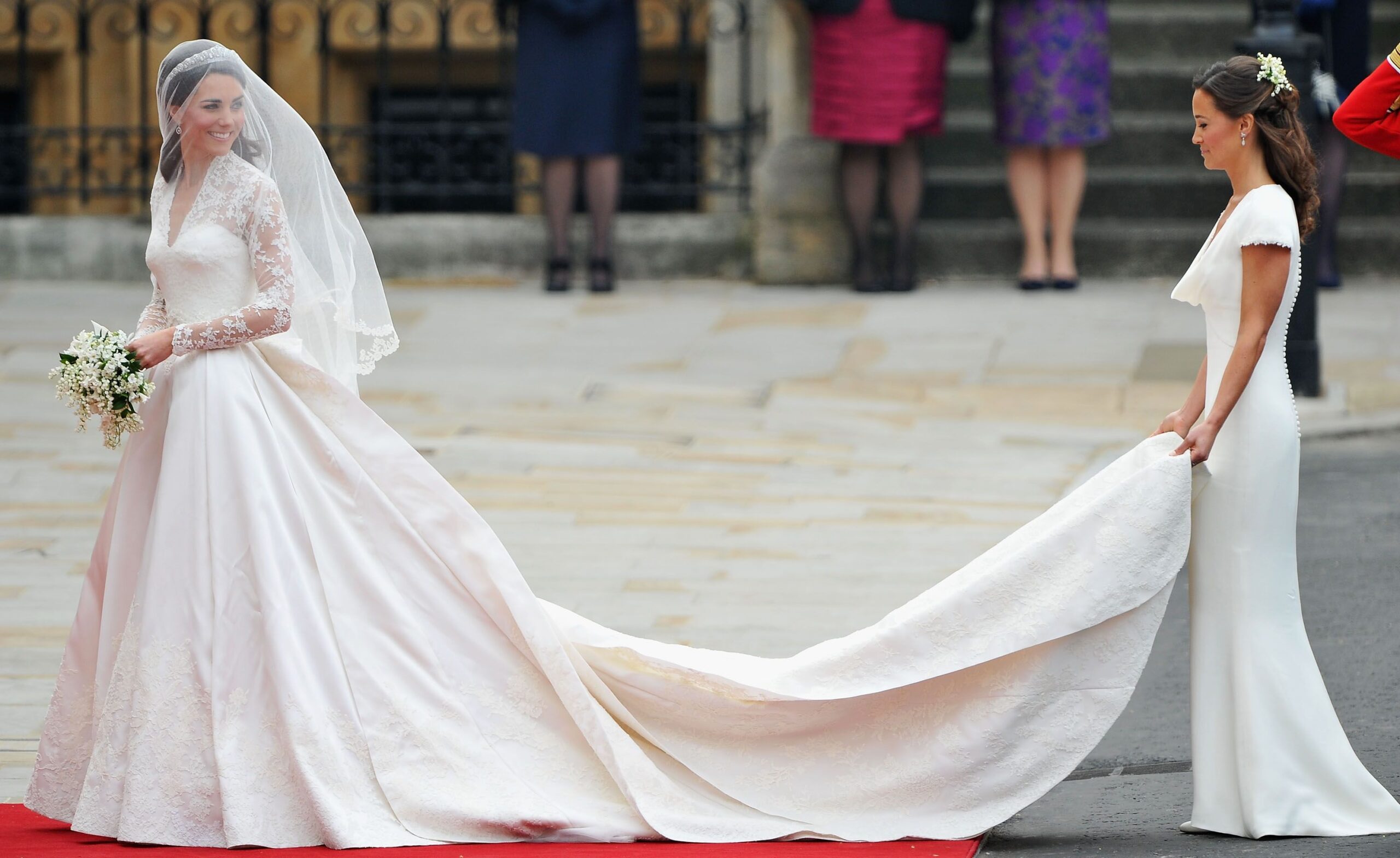 On Will and Kate’s wedding day the Queen wore a cheery yellow hat and dress coat designed by Angela Kelly with a diamond brooch and pearl necklace.For Harry and Kate’s wedding, the Queen wore a bright lime green dress and coat by Stuart Parvin. Her green and purple hat was designed by Angela Kelly.Prince Charles wore a military uniform to his eldest son’s wedding in 2011, while his wife, Camilla, wore a Philip Treacy hat and a light blue and champagne-colored dress coat by Anna Valentine, the same designer who created her wedding dress in 2005.Once again, Camilla Parker Bowles wore a Philip Treacy hat and and coat dress by Anna Valentine, this time both in pink.

Prince Charles swapped out his military uniform for a gray morning suit for his younger son’s wedding.Prince Andrew’s daughters wore two of the most memorable outfits to the royal wedding in 2011. Princess Eugenie wore a bright blue Vivienne Westwood dress with a coordinating Philip Treacy hat, while Princess Beatrice donned a dusty pink Valentino Couture dress and coat with a now iconic Philip Treacy fascinator.The royal sisters went for much more understated looks at Prince Harry and Meghan Markle’s wedding. Princess Eugenie wore a 60s-inspired dress by Gainsbourg and a pillbox hat by Fiona Graham, while Princess Beatrice wore a teal dress by Roksanda Ilincic and a matching headband by Stephen Jones.