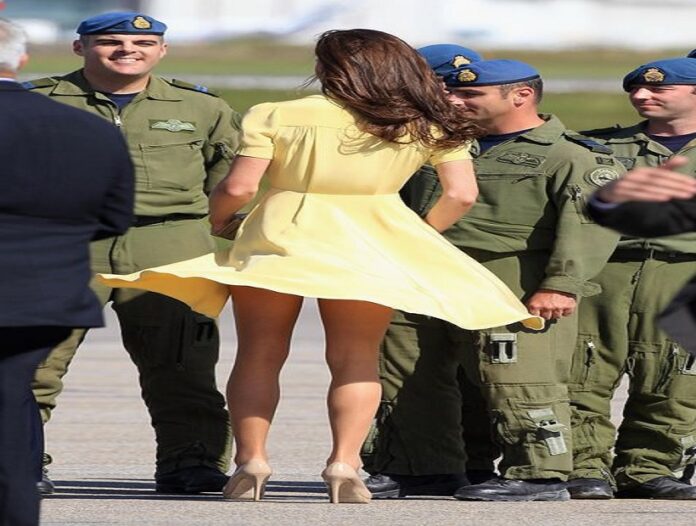 Long before “Megxit” became a term synonymous with royal scandal, “Middleton” was one of the most spoken-about royal names in the public eye.

Kate Middleton was thrust into the spotlight when she began dating Prince William in 2003, and in the ensuing 17 years she’s faced her share of controversial moments. Here’s a look back at how the commoner adapted to life in the royal family — and in the face of criticism. 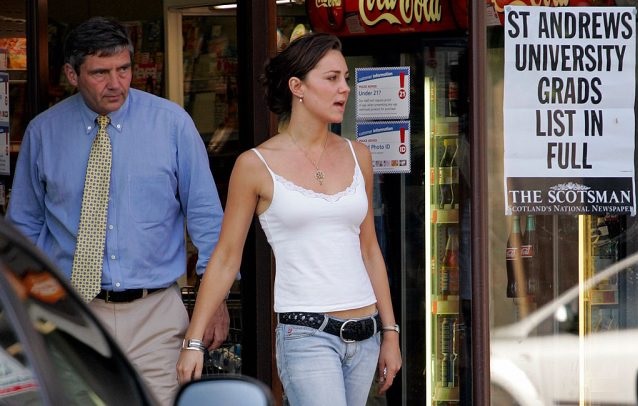 Kate and William first met at St.Andrews University in Scotland in 2001, but it wasn’t until two years later that their relationship became public. During that time, she walked the catwalk in a sheer brown dress for a college charity fashion event, a moment that reportedly caught the young prince’s eye. When Kate and William split for three months in 2007, the duchess got her first taste of tabloid trolling.

When Kate attended an event in bright yellow shorts and a sparkly green top one evening, the Daily Mail reported Buckingham Palace was “appalled” by her appearance, the publication calling it the “most unlady-like display”. In this time, she was also spotted frequently clubbing in London with her younger sister Pippa. 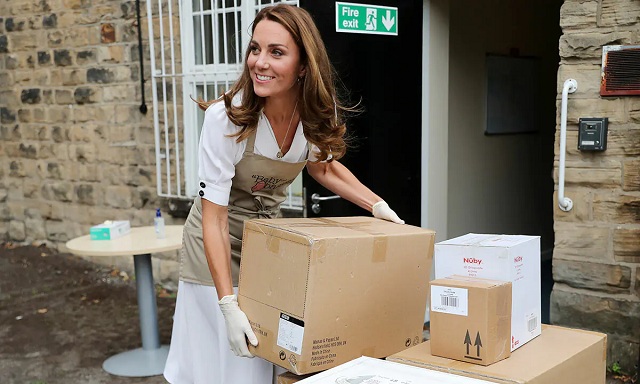 “The two girls would have spray tans and blow-dries together, and decide which social events to attend,” author Marcia Mood wrote in Kate: A Biography. During the time, Kate and Pippa’s foray into high society earned them the not-so-kind label ‘The Wisteria Sisters’, according to a royal source.

“They’re highly decorative, terribly fragrant and have a ferocious ability to climb,” was the explanation reported at the time. “So many doors were opened to Kate when she was with William and she’s certainly not going to let them close now.” William and Kate reunited in July that same year. 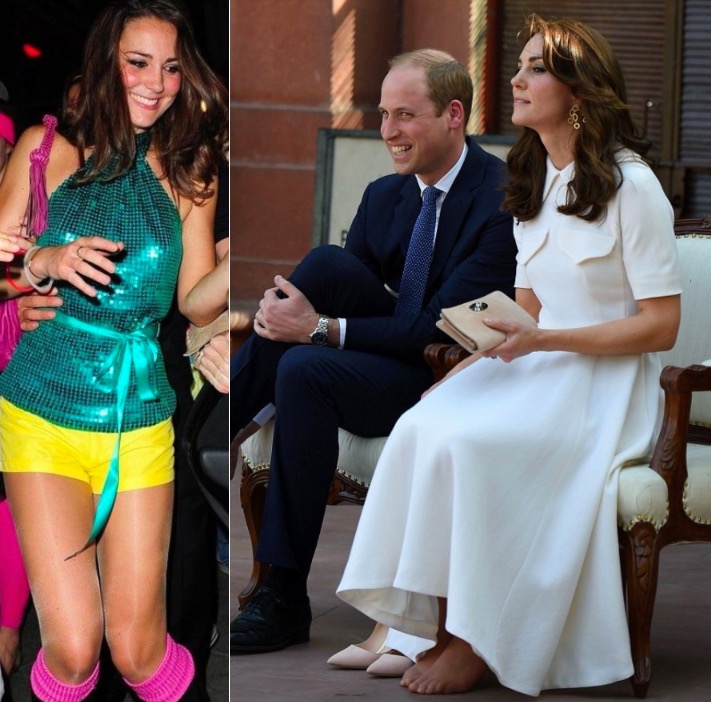 “At the time, I wasn’t very happy about [the breakup] but actually it made me a stronger person,” Kate later admitted. “You find out things about yourself that maybe you hadn’t realised, or I think you can get quite consumed by a relationship when you are younger.” 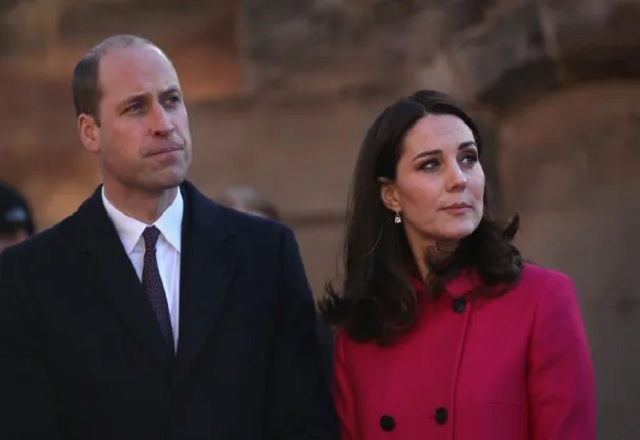 No one is immune to crossing the line of royal ‘protocol’, except maybe the Queen, and Kate has had her fair share of rocky moments. In 2016, the Duchess of Cambridge decided not to present the shamrocks to the 1st battalion Irish Guards on St. Patrick’s Day, a tradition first started by Queen Victoria. She was subsequently ridiculed on social media for staying home with her children.

Kensington Palace said of the decision: “While the Duchess has accompanied the Duke every year since his appointment in 2012, and will do so again in future, this year she sadly could not make it because she is prioritising time with her children before next month’s tour of India and Bhutan.”

During her third pregnancy, Kate wanted to keep her public appearances “to a minimum”, a decision that reportedly didn’t go down well with her grandmother-in-law. It was claimed Her Majesty was upset with the Cambridges and believed the future Queen consort shouldn’t skip her duties, even in the event of morning sickness. 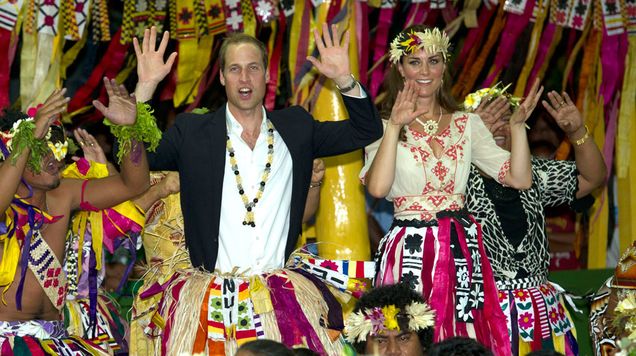 Controversy also struck during a 2012 trip to the Solomon Islands when Kate and William wore the wrong traditional outfits to dinner, opting for pieces from the Cook Islands by mistake. The incident was commented on by Clarence House in a statement.

“It was not learned until later in the evening that the clothes weren’t from the islands. But it was understood that the Duke and Duchess intended to wear traditional Solomon Island clothes and this was appreciated,” it read. “No offense was caused.” The couple also had staff threaten to walk out on them in 2016, after it was announced their staff would suffer a $5,000 pay cut. However, it was never revealed whether they followed up on the strike. 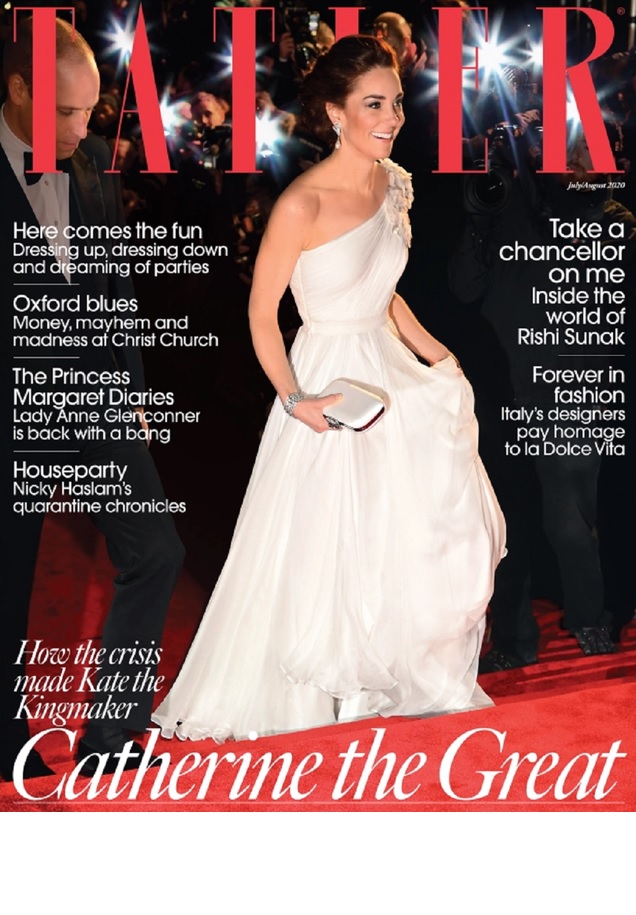 Arguably the biggest scandal to rock Kate’s royal life was when topless photos of her was published in French tabloids in 2012. The duchess was holidaying in France with Prince William, and was sunbathing on a private estate when paparazzi captured photos using a long lens camera.

The royal couple sued for $1.9 million in damages from Closer magazine and the daily newspaper, La Provence. “The clandestine way in which these photographs were taken was particularly shocking to us as it breached our privacy,” Prince William said during the ensuing court case. 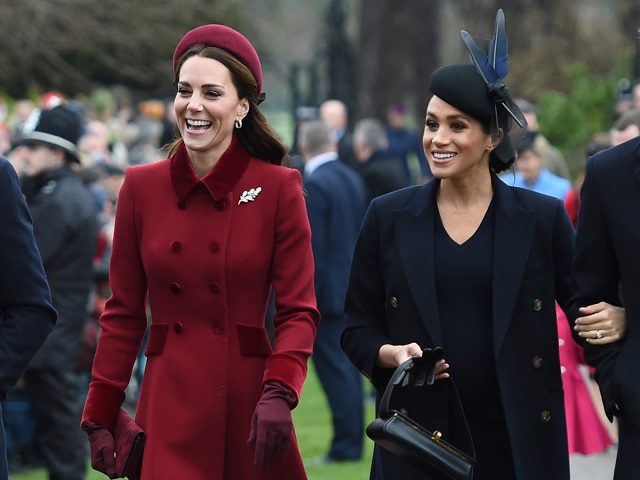 “My wife and I thought that we could go to France for a few days in a secluded villa owned by a member of my family, and thus enjoy our privacy.” No stranger to being the target of tabloid drama, Kate also had an issue with British publication Tatler this year.

The magazine ran a story titled ‘Catherine the Great’, which made claims about Kate’s family and her reaction to Prince Harry and Meghan Markle’s royal exit. Kensington Palace claimed the cover story included a “swathe of inaccuracies and false misrepresentations”, and the Cambridges reportedly sent legal letters demanding the story be taken down from the publication’s website.

“We can confirm we have received correspondence from lawyers acting for the Duke and the Duchess of Cambridge and believe it has no merit,” Tatler revealed in a statement. 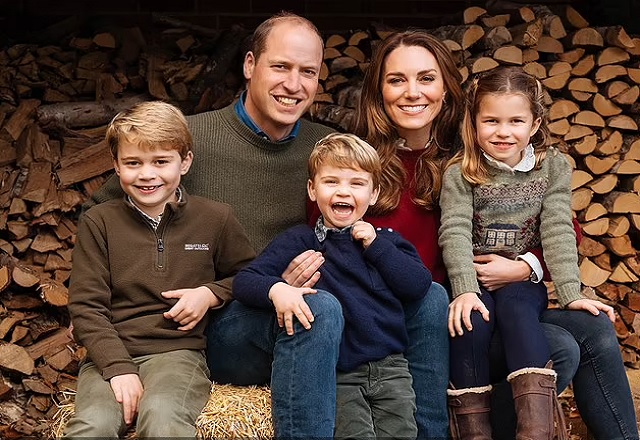 As a mum of three in the public eye, Kate has faced plenty of backlash in regards to her parenting choices. In 2013, the Duchess was slammed for taking a trip to the Maldives eight months after Prince George’s birth and leaving the newborn at home.

Kate was also criticised for appearing “too perfect” when she presented Princess Charlotte to the public hours after giving birth.

Even the news she was expecting a third child in 2017 was met with criticism, the Independent UK writing: “One could argue it’s just an unhappy coincidence that the announcement of a third royal baby comes in the same year the Government deems third babies a luxury not every family has earned.” 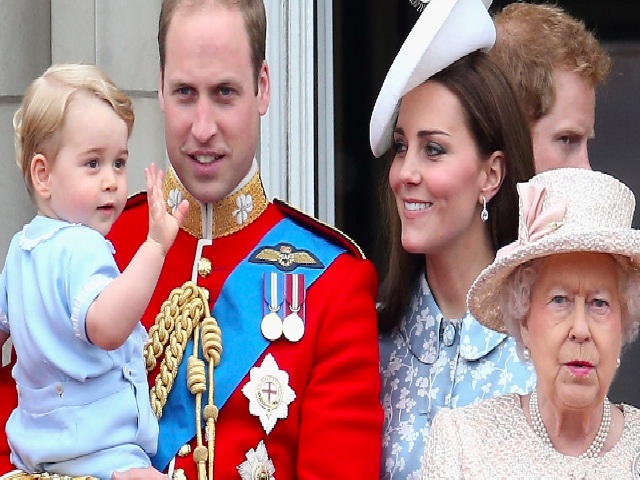 The British government passed a cap on child tax credits the same year Kate was pregnant with Prince Louis, meaning families could only claim up £2,780 (about $3,620) per child for their first two children.

Naturally, when Prince Louis was born, Kate was again criticised for appearing outside the hospital just hours after giving birth; even actress Keira Knightley said she set “unrealistic expectations” for new mothers.

It’s the royal family; they’re just as dysfunctional as the rest of us (but with crowns). The long-standing rumour that Kate and sister-in-law Meghan don’t get along has been documented so intensely, we wouldn’t know how to condense it.

Back in 2017, it was reported Pippa Middleton had ‘banned’ Meghan from her wedding, following a “no ring, no bring” rule that left the former actress out of the picture, as she and Harry were only dating at this time.

However, a biography on the Duke and Duchess of Sussex has since hosed down this claim. Kate’s “wild” uncle Gary Goldsmith is a more interesting family controversy, having been papped on nights out on the town and being caught publicly urinating.

Serious allegations of domestic violence were also levelled against Goldsmith in 2017, involving his wife, Julie-Ann Goldsmith. Goldsmith received a £5,000 ($9,120) fine after pleading guilty to assaulting his wife outside their central London home. 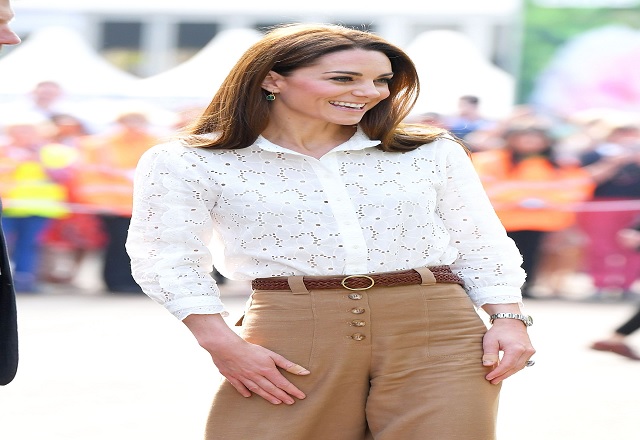 Unfortunately, sartorial slams follow every woman in the public eye. Whether it’s deciding to wear real fur or leaving her engagement ring at home, Kate has not been immune.

At her 2011 wedding, Kate’s decision to wear her hair in a fashionable half-up, half-down style went against the traditional “up-do” of royal brides including Her Majesty.

“Royal sources tell me that the royals indicated very strongly to Kate that they would prefer her to wear her hair up for this very special occasion,” royal reporter Ashley Pearson claimed in the documentary William & Kate: The Journey.  “They ended up compromising on her look.” 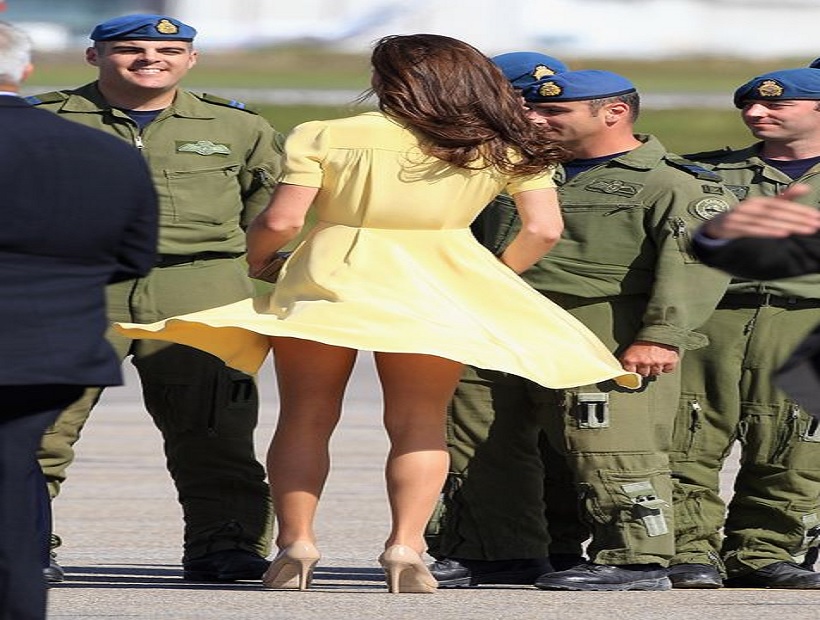 Her wedding dress was also slapped with a lawsuit; it was claimed the lacy, extravagant gown was a design stolen from British designer Christine Kendall.

Kendall claimed to have submitted her sketches to Kensington Palace ahead of the wedding. Five years later, she filed a lawsuit against Alexander McQueen, claiming her sketches were copied by the brand’s creative director Sarah Burton, who created Kate’s dress.

Even the Duchess’ nails have been a source of contention. In 2012, she wore nail polish deemed “too dark” and in violation of royal protocol. However, royal novelist and reporter Omid Scobie dispelled the rumour, claiming in Harper’s Bazaar there was no royal protocol on polish.

During a ceremony to pay respect to Indian leader Gandhi in 2016, tabloids marvelled yet again at the Duchess’ pedicure – namely the fact she had neglected to have one.

When it comes to the family jewels, the Duchess was even accused of “upstaging” Meghan with her choice of jewellery at nephew Archie Mountbatten-Windsor’s christening.

Royal fans noted that Kate wore Diana’s famous Collingwood Pearl Earrings, while Meghan did not sport a special heirloom from her mother-in-law for the special occasion. 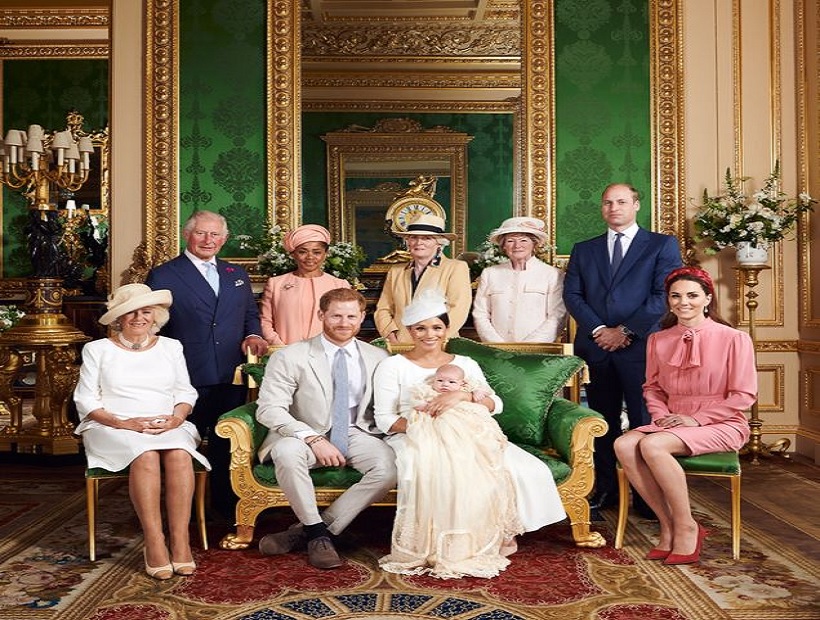 The duchess also raised eyebrows earlier this year when she was spotted without her engagement ring, though this was done in an effort to slow the spread of COVID-19.

There’s no denying royal life comes with plenty of privileges, but as we’ve seen with Kate, Meghan, Princess Diana and so many others, it’s also filled with scrutiny – both fair and entirely unreasonable.