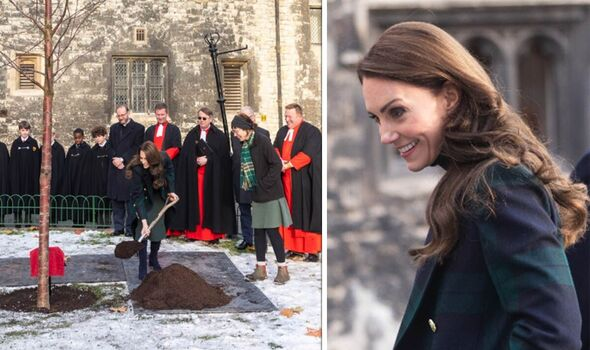 The Princess of Wales was all smiles as she planted a wild cherry tree in memory of the late Queen Elizabeth II. Pictures from the engagement show Kate shovelling soil at the base of the young tree to fully cover its roots. Dr David Hoyle – the Dean of Westminster – members of the Chapter of Westminster as well as the abbey’s head gardener – Jan Pancheri – and her colleagues Cormac Connolly and Danny Bitten looked on as the royal carried out her tribute. The Princess donned a long green and blue chequered coat on top of a dark green dress and blue boots for this visit to the abbey in central London.  The tree dedicated by the Princess of Wales to her late grandmother-in-law came from the Duchy of Cornwall estate. 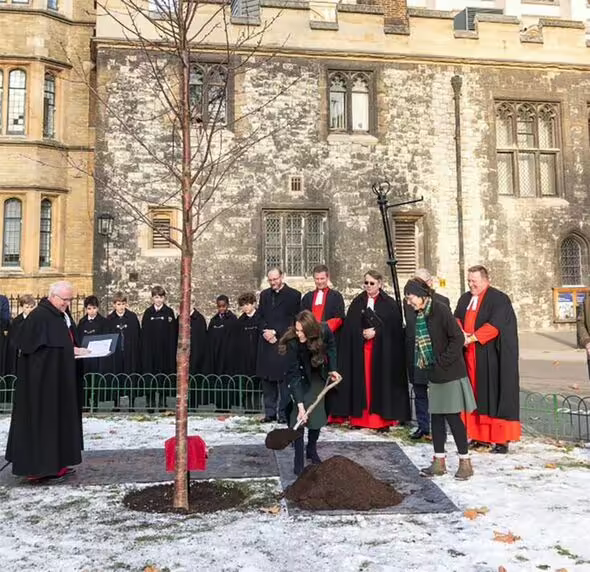 Prince William inherited the estate from Charles on September 8, following his accession to the throne.While William and Kate automatically inherited the titles of Duke and Duchess of Cornwall from King Charles, the new sovereign had to create his firstborn Prince of Wales on September 9, as the title can only be passed on by the monarch. The cherry tree was planted in Dean’s Yard to replace a horse chestnut tree that was rotten and suffered from a Summer Sudden Limb Drop earlier this year.After shovelling the last spadefuls of soil onto the tree, Kate also unveiled a memento of her visit and tribute to the late Queen.The plaque read: “This wild cherry tree, a gift from the Duchy of Cornwall, was dedicated in memory of Her Late Majesty Queen Elizabeth II by Her Royal Highness The Princess of Wales on 14th December 2022.”The tree was one of the thousands included in the Queen’s Green Canopy initiative.Launched by the late monarch herself and the then Prince Charles in October 2021, this tree-planting project aimed at marking the Platinum Jubilee of Elizabeth II by creating a memory of the Queen that would last for decades.While the initiative was meant to celebrate the 70th year on the throne of the late Queen, it gained added poignancy following her death in September 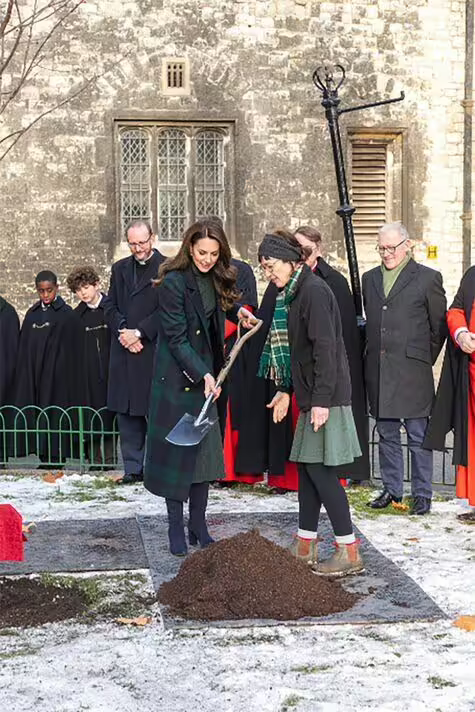 The Queen’s funeral service was celebrated at the London abbey. As noted in the plaque, this visit to Westminster Abbey took place on Wednesday last week, amid the final preparations for Together at Christmas – the special Christmas Carol service spearheaded for the second year in a row by Kate. The service took place in the Gothic church on Thursday evening and is set to be televised by ITV1 on Christmas Eve.  The special event was dedicated to the late Queen and the value she upheld throughout her life – including duty and faith. Several members of the Royal Family joined Kate and Prince William at the abbey to attend the star-studded service – including King Charles, Queen Camilla, Zara and Mike Tindall and Sophie, Countess of Wessex. Prince George and Princess Charlotte were also among the attendees.