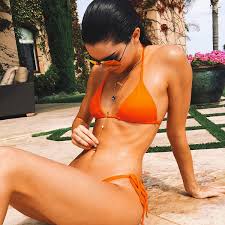 The youngest Kardashian-Jenner sibling is back at it again, with the launch of yet another business venture. Joining her beauty—and potentially baby—brand businesses, the 24-year-old has decided to use her and Kendall’s fashion brand knowledge to good use, by launching her own swimwear brand.

Aptly titled ‘Kylie Swim’, fans were already onto her plans to venture out into beachwear, after she trademarked the name ‘Kylie Swim’. However, Jenner remained in radio silence over her latest businesses decision until August 18. 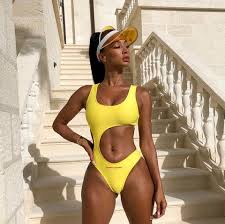 Announcing the venture through her Instagram stories, Jenner posted a Polaroid image of herself wearing a pink and mustard cut-out swimsuit, with a caption that read: “Working on @kylieswim and I can’t wait to share.”

Posting the snap happy snap to her own Instagram feed, fans who tapped through to the new Instagram page can see the layout for future brand announcements a logo, unlike others in her brand lineup. 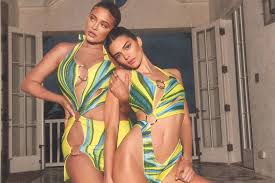 Sporting a pink background and peach font, the logo emulates a ’70s-style bubble typography and simply says ‘Kylie Jenner’, rather than the name of the swimwear label.

Almost immediately, fans and Kardashian-Jenner family members headed to her comments to share their support and express their excitement over the news. Kim Kardashian wrote: “WOW WOW WOW,” with a series of fire emojis, and was joined by Khloé Kardashian, who added: “Ummmmm are your abs ok??” 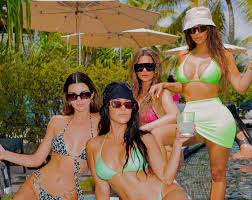 Most recently, Jenner has been embroiled in her fans’ theories that she is currently hiding her pregnancy with baby number two, after fans were sceptical over the legitimacy of photos supposedly taken on her 24th birthday days ago.

Over the weekend, Jenner celebrated the day by sharing a carousel of herself wearing a green dress with the caption reading: “Cheers to 24,” suggesting that said photos were taken on the day of her birthday, meaning the same day that she celebrated the event. 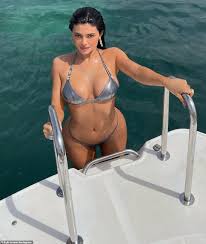 However, eagle-eyed fans have taken to TikTok to explain the discrepancy between different imagery of Jenner from the day, leading many to believe that the photos she posted on her Instagram may have been pre-shot and pre-bump.

The photo that threw a spanner into the works was one taken by Jenner’s older sister, Kim Kardashian, who posted a photo of Jenner with her friends and family holding cocktails.

But it was her choice in manicure that fans have spotted, since Kardashian’s image saw Jenner with green nails, while the images of herself in a green dress saw her with pink nails.

However, despite this theory, the imagery shared from her recent swimwear brand announcement have fans believing that perhaps they were too quick to assume.

But as always, if Jenner chooses to keep her private life, well, private then it’s important that fans respect her decision.

In the meantime, we’ll be waiting with bated breath to for the launch date of the Kylie Swim collection.