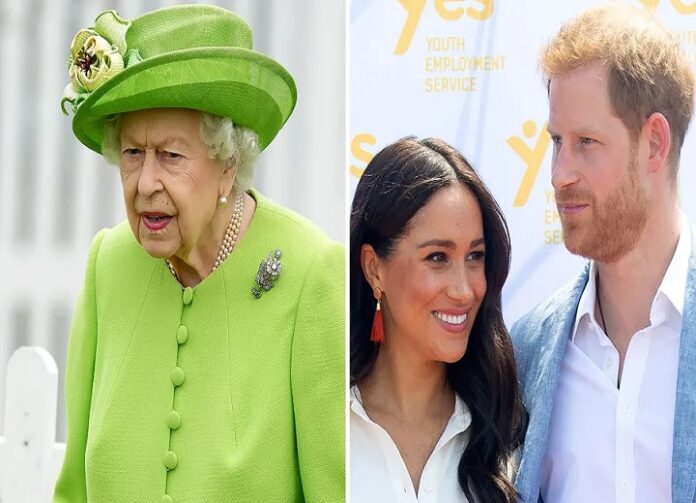 Meghan Markle was unable to fulfill a promise she made to the Queen when she first met her, royal author Gyles Brandreth has claimed.

The Duchess first met the Queen during a 20 minute meeting at Windsor Castle.

It was a last-minute arrangement, meaning Meghan had to get a quick lesson in how to curtsey from Prince Harry’s auntie, Sarah Ferguson.

Mr Brandreth said that Meghan and the Queen immediately built a rapport, chatting about the actress’ career and life in Canada.

In his book Elizabeth: An intimate Portrait, Mr Brandreth wrote that Meghan made it clear during the meeting that she would focus on royal duties.

He wrote: “She did everything she could to make her future granddaughter-in-law feel welcome. She was concerned for her future happiness.

At their first meeting, the Queen said to Meghan: ‘You can carry on being an actress if you like – that’s your profession, after all.’

“But Meghan was ready for royal duty and, of course, the Queen was delighted by that.

Mr Brandreth also claimed that Meghan made a promise to the Queen that she would not let her down on the Commonwealth.

He continued: “She promised the Queen that when it came to the Commonwealth she wouldn’t let Her Majesty down.

The Queen liked Meghan and told lots of people so.”

Meghan was later appointed the Vice President of The Queen’s Commonwealth Trust.

When the Sussexes left the royal fold in 2020, they announced that they planned to ” balance our time between the United Kingdom and North America, continuing to honour our duty to The Queen, the Commonwealth, and our patronages.”